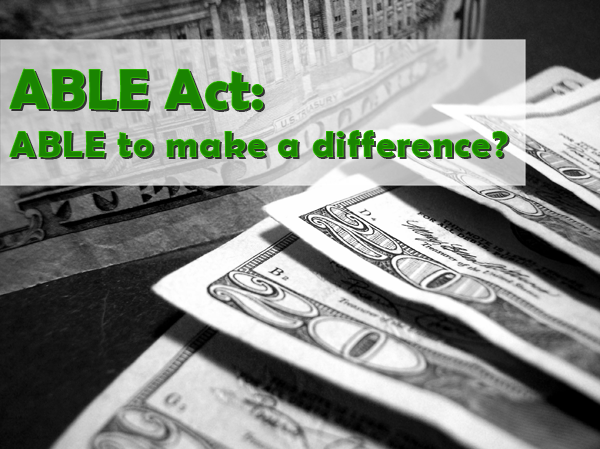 One late night last winter, I checked my email box to find a message from a website called Change.org, home to thousands of petitions created by individuals trying to rally people together for their specific causes. Admittedly, many reach my trash can before my eyes scan the words on the page.
Not because I don’t want to support every good cause in the world, but because I simply get a lot of automated emails from various places.

Apparently, it was one of those times the universe decided to throw something in front of me and make me take notice.

I stopped and read.

I am extremely glad something about that message caught my eye that night. It was asking me to support something that could directly affect my life called the ABLE Act.

I had no idea about it!

The ABLE Act, otherwise known as Achieving a Better Life Experience would allow people with disabilities to have a tax free savings account that will allow us to save for our futures and to have more equality in our lives.

This is a very simple explanation of the act, but I was immediately excited. When it comes to my finances, it’s something that always puts a bit of a knot in my stomach. Because I am on Supplemental Security Income, or SSI, I have an asset limit. If I go over that limit, I lose my benefits. I have always wanted the freedom to save money in the bank, just like everyone else does. I want to be able to have a savings account to put money in for things like dental checkups, educational courses, or other essential things people need to move forward in life.

You can bet I put my name in support of this ABLE Act petition.

Many individuals with disabilities share in this excitement. Many of us receive assistance from government programs like SSI, Medicaid, or SNAP benefits. Some of us are unable to work, can only work part time, have unpredictable health, or have a difficult time finding employers who will hire us for our skills because of our disabilities. We rely on these funds to live our daily lives, and frankly, for some people it isn’t even enough to live on.

While we can be grateful assistance exists to help us, these programs also sort of trap us into impoverished lives of inequality as a result of their outdated rules and regulations. For example, we are only allowed to have up to $2000 in liquid assets. If we go over the limit, we risk losing the help we get. So, saving more than that is out of the question.

Two thousand dollars doesn’t get anyone too far if they want to go to college, buy a house, or pay for emergency expenses that might crop up. It also doesn’t allow us much to work with if we need medications or assistive devices that aren’t covered–and anything medical related is far from cheap. This is a completely unrealistic limit in our economy today.

It’s basically like we have been set up on a flying trapeze without a safety net. This is an unfair thing to do to one of the most financially vulnerable populations in society, and it’s been going on for decades! It has also been too long since advancement has been made with rights pertaining to the disability community.

The ABLE Act may be the first step in the right direction.

A Deeper Look at the ABLE Act

The ABLE Act is an amendment to the tax code which will allow a person with a disability or someone on their behalf, to open a tax free savings account. This means interest accrued in the account will not be taxed, nor will the funds that are withdrawn for expenses.

The money saved in the account can be utilized for an array of necessary needs which include: housing, transportation, medical and dental costs, therapy, homecare, assistive technology, employment training, financial management, legal fees, education and any other expenses approved by the Secretary of the Treasury under regulations. The maximum amount of savings the account holder can have before losing benefits such as SSI and Medicaid is $100,000. Anything saved under that amount will not put benefits at risk.

The idea for the ABLE Act first came into existence about eight years ago. Through years of hardcore lobbying and attaining the attention and support of government representatives such as Senators Robert Casey, Jr., (D-PA), and Richard Burr (R-NC), the act finally reached the floors of the House and Senate for voting late last year.

The bipartisan support within both groups was overwhelming. It seemed to be a piece of legislation that finally had both Democrats and Republicans working together for something that was really going to benefit citizens in a large way–us.

President Barack Obama signed the ABLE Act in December, and now it is up to our individual states to figure out their implementations of it. It is hoped all states will have ABLE accounts available to us by the end of this year.

The ABLE Act is an amazingly progressive step toward our equality and financial independence, one that took too many years to be put to a vote. We need to look at it as a win for most of the disability community, but it isn’t necessarily a win for everyone.

The positives of the ABLE Act include:

The negatives of the ABLE Act include:

In my opinion, the positives do outweigh the negatives, not only in number but in value. I do have a few issues with the points I listed in the negative category though.

I can’t help but feel anxious for individuals in the future who become disabled after age 26. What about the hundreds of thousands of people who are diagnosed with MS every year? Or those who become paralyzed from strokes or accidents? Should they be left without a way to save?

Should they be made to live as if the ABLE Act doesn’t exist because of a rule that excludes them?

This is one area where there needs to be some reform. I am of a mindset where if something is going to be done, there should be great lengths taken to do it right the first time. I’m not saying this isn’t a great start, but why the age rule? How long will it take, and how many people will need to lobby to get that rule amended?

The second negative point doesn’t bother me quite as much as I don’t feel it compares to the first in its importance. $14,000 is a reasonable yearly limit on savings but I feel we should have the option to save more in a year if we are able. For instance, what if we are gifted a large sum through an inheritance?

Third, I do understand where the ABLE Act is coming from in delivering money back to Medicaid in a way upon the beneficiary’s death. The government supports our needs, so if we save money into the account, upon our death the funds go to pay back Medicaid for resources received.

But, if I work and save money or if it was gifted to me–if my life should end I would like for my money to go to some person or cause that I value. I’d want my savings to be turned over to my family, or be put into college funds for my best friend’s children, or be donated to charities.

A Closing Thought on the ABLE Act

As a part of the disability community, I feel that too often our group is limited in our choices. A lot of this has to do with how programs and laws pertaining to us are set up in our society and government. This boxes us in, and holds us back from reaching our full potential. Yes, reaching our potential is very much up to us as well, but there are things we are unable to change in our lives due to policies made by officials who usually have no idea what it’s like to be in our shoes.

We want to be as independent as possible and we will fight every day for it. We aim to be active members of society, living in our own homes and not forced to live in institutions that will serve as a detriment to our mental states and independence.

I hope one day, we won’t have to be seen as less capable than anyone else. We will be able to work without worrying whether or not our safety net will be taken away or if we will have enough money for groceries at the end of the month. We won’t have to jump through proverbial hoops to get all of our medical needs met.

I still am very excited about the ABLE Act, and I’m looking forward to seeing lives be positively affected once these accounts are available. Hopefully, this is only the beginning of bigger things to come that will allow us to really feel as if we matter in this country.

What are your thoughts on the ABLE Act? Is this a push in the right direction? Leave your comments below! I’d love to know.

It was made possible because of your contributions. We can’t wait to introduce  more freelance writers throughout the rest of the year or until the money runs out! (Yikes!)

Thank you again for being audacious enough to support our mission of living audaciously one day at a time!

You can check out the list of  audacious donors here.