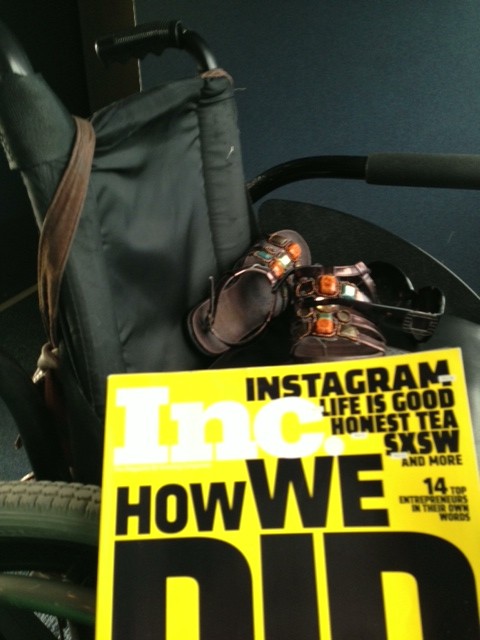 Being Disabled is No Joke

There are times when several thoughts come together at the right time. This post has been incubating in my mind for about a month. It started with one news event, a few personal experiences and a recent Facebook post. Now, I think I am ready to give it birth without lashing out at the people who might never change. Grab something to eat or drink because this post will be lengthy but you know what? Who cares how long it is as long as it’s out?Recently, our country has been divided over the George Zimmerman case. I won’t go into it other than to say that I’m having a hard time swallowing the comments that only  black people have it the worst in America. They say they get discriminated the most in all areas of life. I can’t support that belief when I know that a majority of  people with physical disabilities like myself get discriminated the most in America despite having the ADA to back us up.

Let’s take a look at history. People with physical disabilities have been killed for being “born wrong” and have been hidden in institutions for bringing shame to the family. Some might say we’ve come a long way. But have we?

In the mid 1990s, I went for my first day as a substitute teacher at my own alma mater, Miami Sunset Senior High School. The lady, Grace, who was in charge of calling for the substitutes was in the main office when I went to get my assignment. You would have thought I came in with a weapon of mass destruction. She paced a little and loudly said, “You’re in a wheelchair!” I knew right then and there, she was a very observant person. *note sarcasm here!*

Luckily, some of my former teachers came to the rescue and reassured Grace that I knew my way around the school better than the other substitutes. She worried how I’d get to the second floor. Umm hello, elevator? The same elevator that took me to the second floor when I was a student there. Could you imagine if she would have said,”You’re black!” or “You’re Asian!” or “You’re Latino!”? The lawsuit would have hit her and the school so fast! But what did I do? I smiled and reminded myself that I needed this job.

Every job interview I ever had for a teaching position in Miami-Dade County Public Schools subjected me to some type of mentioning about the wheelchair and whether I could do the job or not. Hmm…let’s put this same situation today for Asians, Latinos or Blacks. Perhaps years ago these situations were common for them but in today’s world, lawsuit would scream at the top of its lungs if it happened to them. But today people with physical disabilities endure it if they want a job. Even after enduring embarrassing interviews, we aren’t guaranteed the job. In the back of our minds, we are thinking, “Is it because I’m disabled?”

Many times people with physical disabilities don’t want to deal with the discrimination that goes on at work out of fear of retaliation or worse! Unemployment. But it happens more than you think. More than society wants us to think.

Recently, I was having an interesting conversation with a very close friend about this entire discrimination topic. She said for me to look around to see how you can’t go anywhere without seeing some type of disabled accommodation. I’m paraphrasing her. This was a bit of a shock since that same morning we ate breakfast at a diner with a sidewalk that was so narrow my wheelchair barely made it. Once in the restaurant, she informed me that the bathroom wasn’t too accessible for a wheelchair. I pretty much knew it after seeing that sidewalk. This wasn’t prior to the year 1990. This was last month! Let’s take a look at all of the other groups who scream about how they are the most discriminated group in America today. Do you think they have a problem with the sidewalk or the bathroom? I’m going to bet they don’t.

This situation was not a one time incident. I’ve found this to be true in Miami, New York City, Los Angeles, Las Vegas and many other cities. Do other minorities have a problem gaining physical access to a bathroom, sidewalk, store, restaurant, movie theater, or parking space? I think I’m going to make another safe bet to say the answer is no.

What’s that place? You don’t know it? It’s the place that most affects people with disabilities. It affects our heart, soul, self-esteem and confidence. It’s the ability to be accepted in society without feeling humiliated, discriminated or embarrassed for having a disability. This, my friends, is what had me thinking for so long on how to approach this topic. I’ll give you two examples and you tell me if this is something we should simply shrug off. Really! I want you to tell me in the comment section.

Recently, two rappers, Drake and J. Cole collaborated on a rap song using the words “retarded” and “autistic” in a negative way. The pressure from society caused them to make an apology. If it really bothered them, they would never have done it in the first place. How’s the saying go? Bad press is good press? I don’t know. I expressed my outrage that people from all over America weren’t outraged at this but people shrugged it off. One friend, a very well educated woman, actually pointed out that I had to give the younger generation a break. She said these words are used by the younger generation all the time. Ironically, it comes from an African American woman who is outraged at the Trayvon Martin situation. So, it’s ok to say  “retarded” and “autistic” as a way to make fun of people but it’s not ok to mistreat African Americans? Hmm..not sure I agree with these either.

Are we supposed to look the other way? It’s 2013 and people with disabilities are still the butt of jokes for many famous comedians. I saw Tracy Morgan make fun of an imaginary woman with every imaginable disability in his stand up comedy act. The audience loved it. I cringed thinking about all of the people who this could apply and I prayed they weren’t in the audience or watching it at home with friends. I guess it’s ok to poke fun of people with physical disabilities as long as we don’t say the word nigger or cracker or spic or fag because then that would cause an outrage.

Being a part of the social media world for Audacity Magazine and other sites, I get to know many people who are considered “social media celebrities” via Twitter or at conferences like New Media Expo . One of the key pieces of advice given to newbies who want to develop a huge social media following is to form tribes aka small communities where you make your readers feel welcome. Isn’t that nice? The way to succeed is to make people feel accepted into your social media world. Sounds good to me. Most of the people I know with physical disabilities use social media all the time. Finally, a place where you will be accepted. No nasty jokes or degrading comments. You will belong to a tribe!

Not so fast, I hate to pop your bubble but even in the social media world, you won’t be shielded from ignorant and cruel comments. This is a problem that has made me lose some sleep recently. You see, not only do I handle the social media for Audacity Magazine but also for Lacosmopolatina.com and Audaciouslady.com which forces me to mingle with these social media gurus. Recently, someone I respected made a joke using the word “retarded” in one of his/her social media platforms. I kept my mouth closed, counted to ten and left my laptop. I felt as if someone had taken a huge bucket of ice cold water and poured it over my head. I couldn’t believe it.

When I returned I noticed that others said they didn’t like the word and one person said that these people were hyper sensitive. I don’t know about you but I saw red when I read that comment. I didn’t want to make a big stink and so I sent  the social media celebrity a private instant message about his/her joke and how offensive it is to people who have Down’s Syndrome or other mental disabilities. The person never replied to me.

I took this non reply as another bucket of cold water. Could I be this wrong about him/her? I tweeted my situation and received two great responses.

@dearhest wrote: You are such an advocate for people with disabilities. I don’t see you supporting anyone like that with time or money.

@Jess44903 wrote: …some people’s minds can’t be changed…so just cut your losses and move on.

I guess not every one is welcomed in this person’s tribe.

I received good advice. But where’s the mass outrage? Why aren’t people upset when jokes are made at the expense of the disabled community? Why aren’t there boycotts? Why aren’t there marches? Why isn’t everyone regardless of gender, race, ethnicity or age asking for fairness and equality when it comes to people with disabilities? Doesn’t society  realize that diseases and disabilities never discriminate against them?  Today, us. Tomorrow, them?

What’s your take on this? Help me get some sleep.