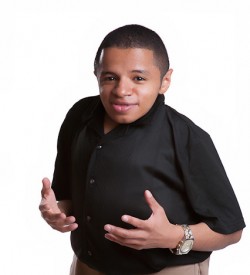 Audacity Magazine is searching all over the world to hear the stories of people with physical disabilities. We have a voice and it deserves to be heard. We took a moment to catch up with Richard Alcantara, an internet marketing professional with over 8 years of experience working in affiliate

marketing. Richard lives with Osteogenesis Imperfecta aka brittle bone disease. Yes! He’s another one of my people! Hooray! This is his story! How do you describe the city/town in which you live in with regard to access for the physically disabled community?

I currently live in Peekskill, New York, a nice quiet little suburb an hour north from the hustle and bustle of New York City streets. Accessibility isn’t too bad except for some of the ‘downtown’area where most of the restaurants and bars are. The streets and sidewalks are mostly paved and clean. While there are curb cuts for wheelchairs, some of the streets are cobblestoned.  No biggie for me since I’m a walker with a cane. Just find me a bar and I will access it!

What was the best part of your childhood? What was the worse part? Did it have anything to do with your physical disability?

I’m a kid from the late 70’s and 80’s. Back during the era of street games like “Stickball”, “Kick the Can”, “Hot Peas and Butter”, “Manhunt”. Unfortunately, I didn’t get to play those games much. Most were too physical. I did watch from the sidewalk though…but where’s the fun in that? One game I did play with my peeps was Skellzies, or at least that’s what we called it. It went by a bunch of different names like Skelly, Skully, Skullies, depending on where you lived in NYC. And I played a lot! So did everyone on my block. It was a game that you played in the street with some type of chip or bottle top with clay or wax in it. We mostly used the tops of the old 35mm film back when 35mm cameras were a thing. We’d fill it with clay and add a penny to give it some weight. We could play all day and night, making noise, annoying the hell out of parents who had to wake up in the morning for work while we were on summer vacation. Annoying little bastards we were, haha.

Between that and flying down the street on my little orange skateboard I was set! Jumping ramps, flying down steep hills, I’m surprised I didn’t get hurt more often! Or run over by a car! I was just as much a knucklehead as any other little kid in that era and my friends treated me no different despite my Osteogenesis Imperfecta.

What’s your greatest strength? How are you using it to make your life better?

My greatest strength is not giving up on my dreams. Too many people get discouraged when things don’t go the way they expect and give up. But, I view those events as learning experiences and only help me as I go on my journey in life. Thomas Edison once said, “I have not failed. I’ve just found 10,000 ways that won’t work.”  That works for me!

What’s your greatest weakness? How are you working on improving it?

My biggest weakness is doing too much or trying to accomplish too much at the same time. Spreading myself too thin these days when so many things are clamoring for my attention like Facebook and Twitter.  Judging from friends and co-workers I know that I am not alone. Taking the time to focus on one task is my goal. It’s key! Whether it’s work related or not, it’s important to set aside time to focus on just one task at a time…like answering these questions! Multi-tasking is a myth! I should know!

Do you have a role model who lives or lived with physical disabilities? If so, who was it? What impact did this person have on you?

I don’t really have any role models who are disabled. While there are lots of visible people today who are disabled and are doing big things, like war veterans, but I didn’t really see many when I was young. Also, hardly anyone had the same type of physical issues I had so there was no one to relate to in that sense. Maybe in the future there will be more well known role models with Osteogenesis Imperfecta. Maybe it will be me. You never know.

What inspires me today are the go-getters, the movers and shakers. Entrepreneurs who started from nothing and became something. Their physical disabilities isn’t a concern of mine. It’s what a person does with what he/she has that makes him/her a winner in my book.

What’s your thought process when obstacles get in your way?

I once heard the phrase “there’s more than one way to skin a cat!” so I know there is always more than one way to do something. Whenever I come across an obstacle, my mind goes into “MacGyver”mode thinking of what other way I can accomplish this particular task. Whether it’s physical or not, there is always another way of doing it if the first way is too difficult. It’s actually a good brain exercise as it keeps me always looking for alternative ways to get things done. For the record, I would never skin a cat! On this issue I’m sure PETA (People for the Ethical Treatment of Animals) and I agree!

What do you do for fun? Tell us what a typical day in your life is like.

Fun for me is hanging out at a bar or restaurant with friends. Catching a movie, exploring the city or just hanging out with family. Boxing night with my bros is always a good night. Unless we just spent $59.99 for a fight that last 1 round. Then it just sucks. Is reading considered fun? I’m Latino and nerdy. I don’t mind alone time with a good book. Biz books, politics, non-fiction, and fiction.

What long-term goals are you working on achieving?

My long term goal is to be a successful entrepreneur running several companies. Currently working with my brother to launch a couple of his ventures and also have a couple of my own ideas which I am working to bring to fruition as well. I have other long term goals like write a book, start a family, get married…but not exactly in that order.

Are you part of a group or organization for people with physical disabilities?

The only group I am a part of is LPA (Little People of America) I usually attend their annual weeklong national convention. It’s like a weeklong party! I go to hang out with my little people friends who I don’t see often. It’s a blast.

What are your favorite websites for people with physical disabilities?

Does this site count? It’s really the only one I look at from time to time. I’m a social media junkie so that is where I am at usually. Facebook, LinkedIn, Twitter and also business and marketing sites.

Give Rich a shout out in the comment section. I know he is more than willing to answer any questions or reply to your comments.