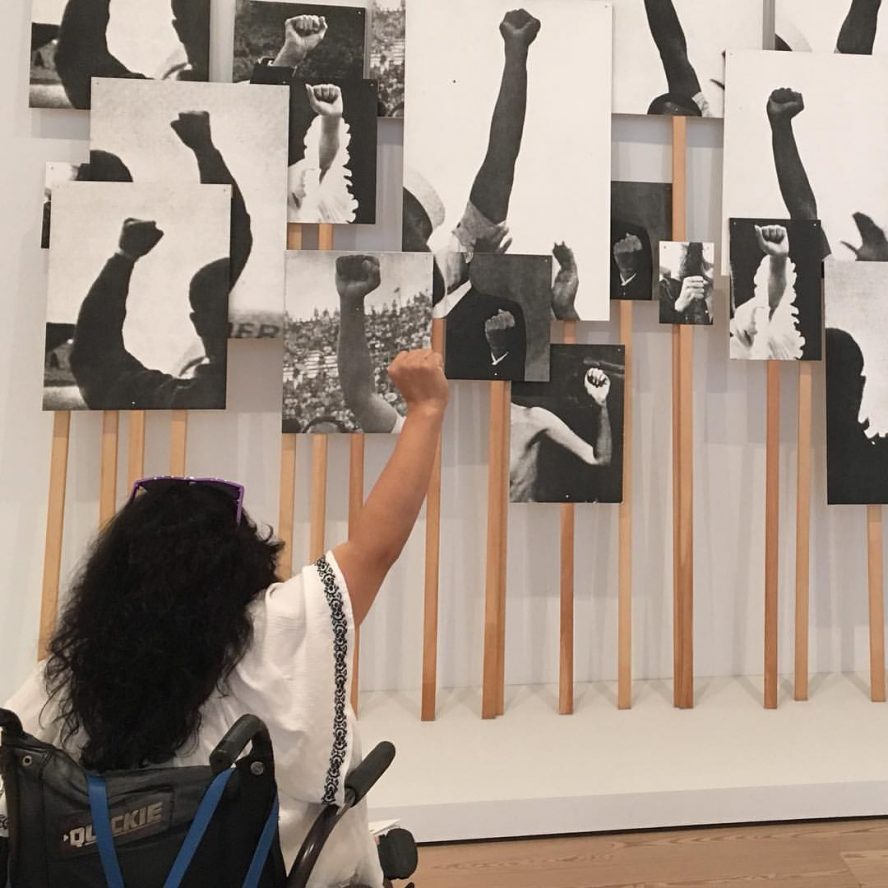 Nathasha Alvarez Fights For the ADA

The 28th anniversary of the Americans with Disabilities Act (ADA) might be one of the most important anniversaries this year. In the United States of America, the current administration is chipping away at the ADA. Instead of pushing forward into a society of inclusivity, people with disabilities are fighting for their life, their health and their basic human needs. I don’t know about you, but I’m ready to fight to not only keep it but, improve on it.

I’m used to fighting for my rights. Long before there was an ADA, I was in the fight. Looking back, I can’t remember a time when I wasn’t fighting for it. If it wasn’t me, it was my mom who did the fighting. I learned everything I know from her about standing up for my rights while sitting in a wheelchair.

My first real memory of having to speak up came from my mom while I was in the hospital. Breaking my brittle bones over and over again became the norm in my early childhood. With that, I had to endure operations, multiple months of wearing full body casts, and dreading the needle! The minute I saw a needle, I cried. It could be 10 feet away from me but if I knew it was for me, I started the tears.

Back then, I would get an injection in my muscle to get me sleepy for an operation. That injection hurt as if I had electricity running down my leg. It was horrible! My mom would mentally prepare me for the shot. She always told the nurses not to touch me until she was there.

One day on the morning of an operation, a nurse woke me up to tell me that she was going to prepare me for the operation. I was really young, maybe 7 or 8 years old. I started panicking. Where was my mom? I asked her. She didn’t reply. She went to get the needle! When she returned, I begged her to wait for my mom. Please! WAIT! She will be here. Wait. It’s going to hurt. I cried and cried. She ignored my pleas.

She gave me the needle. I yelled bloody murder. I was panicky and tense, definitely not a good time to stick a needle in a little girl’s leg muscle. It was traumatizing. Think about it. I’m 48 years old and I can still remember it.

My mom arrived, I told her what happened because I was still crying. So what do you think happened next? Let’s just say that I think the people in China heard my mom go off on the nurse at the nurse station. The result? No one ever touched me again without my mom there. This was in the 1970s. No ADA. My ADA was my mom.

My Mom Was My ADA

Later in 1981, I was enrolled as a 6th grader into Gulfstream Elementary. As I’ve stated in previous posts, I spent the first few days in a room full of people with disabilities. It wasn’t odd because in New York everyone in my school had a physical disability. But then, it started getting weird. Why was I watching Captain Kangaroo? I didn’t even know who he was until that week. I would go home telling my mom that we learned how to tie our shoes or we learned how to color. She was shocked.

Turns out the school automatically thought that because I had a physical disability, I must have a learning disability. Still no ADA. Nothing there. Only my mom. What do you think happened? I was placed in a mainstream classroom and I attended the gifted program where we (my mom and I) got to attend two classes at Miami Dade Community College once a week. I chose a class on ESP and another one on psychology.

Let’s stop to think about something. What if I didn’t have the type of mom that I had back then? My life would be totally different and I can’t say it would be for the better. This is another reason we should be united in fighting to keep the ADA.

So how can we each be our own ADA advocate? By speaking up! My mom started me at a young age. It was as simple as having me order my own meal at a restaurant. Speak clearly, Nathasha. Tell her what you want. Tell her how you want your steak. Go pay for the bill.

When I went to high school, I was hit with obstacles. Still no ADA. Miami Sunset Senior High School didn’t have ramps for their portable classrooms. Poor Mr. Michele, my French teacher would meet me in the library. I didn’t know it then but once again, my mom moved some type of mountain because the next thing I knew all of the portables had ramps. I was off to parlez avec mes amies!

Some people would be oohing and ahhing at these stories. Honestly, I thought it was part of life. You don’t like something, so you say something. I was raised that way. I didn’t know any other way of dealing with situations.

Looking back, I’m eternally grateful that this was my norm. Perhaps it decreased any hesitation or fear on my part to speak up for myself or for others. I remember in New York, we went on a field trip. My friend, Adam needed some type of medical procedure and he didn’t have time to eat lunch with the rest of us. Adam couldn’t produce physical tears but I knew he was sad. I asked him why. He said he hadn’t eaten and the lady said he couldn’t eat on the bus. Adam was hungry. No ADA yet.

I raised my hand until one of the teachers saw me. I told the teacher what Adam said. She gave him his lunch. Sometimes you see something, so you say something. It’s that simple.

The University Of Miami Challenge

Never in my life did I ever think that my first 18 years of life would be a training field for my first year at the University of Miami. Still no ADA there. Just me, my mom’s training and my big mouth.

When I found that the University of Miami expected me to use a bathroom stall with a shower curtain as my means for privacy, I didn’t stay quiet. I spoke up. It wasn’t that easy. My voice was being heard by people who didn’t care if I had a bathroom or not. They said that that was the best they could do. I took to the Hurricane Newspaper to speak up. An unexpected ally turned up. My English composition professor suggested I focus my research paper on the University’s compliance with Section 504 of the Rehabilitation Act.

I couldn’t believe my amazing fortune that my British professor for English Composition would know about an American law and let me investigate the university for a grade! When I asked the office people to help me find information about the school’s layout, I got nothing. Silence! Crickets!

My unexpected assistance came from the custodians and maintenance people. They knew I was searching. They told me to make an appointment with the person in charge of the blueprints of the university at the physical plant. I’d never seen real blueprints in my life. Even the man in charge of them was helpful. I had support from everyone except the people with the authority to make change.

Still no ADA. But I carried on. In fact, if you want to get real. I never even knew about the ADA when it came out. I never said ADA or Americans Disability Act. I honestly thought it was a given. I should have access to everything that the rest of society had. I didn’t know any other way. No one ever told me no I couldn’t do something because I had a disability.

Whenever I said, it’s the law! I was really referring to Section 504 of the Rehabilitation Act. I once told Dr. William Butler Vice President of Student Affairs that if the school didn’t get within compliance, someone would get seriously hurt. I never knew it would be me.

I fell out of the University of Miami’s bookstore freight elevator. Yes! Freight elevator. Why? Because the University of Miami claimed it was the only way for me to get to the second floor of the bookstore. But magically, once I fell out of the elevator and filed a lawsuit, the elevator in the breezeway became accessible for others.

Now this is post ADA but I didn’t know about the ADA. I only knew about Section 504 of the Rehabilitation Act. I thought I had a big yielding stick!

Later on, the ADA became a common word in my life. It helped me when someone said they didn’t need to have an accessible bathroom in their business. It helped me when I went to public events like concerts, nightclubs, airports and parks.

The ADA became my new friend. With the ADA in my corner, I could help my friends who were being discriminated because they didn’t know about the ADA or they were too scared to speak up.

My journey with the ADA is far from over. So when our current administration wants to chip away at it, I get riled up. When my friends say that they voted for Trump because of economical reasons, they obviously don’t know about the ADA.

You see, me and about 65 million other people with disabilities enjoy eating, shopping, going out, and breathing. Therefore, we are part of the economy. If the current leadership continues to chip away at the ADA, we won’t be able to go to restaurants, travel, enjoy entertainment events, see doctors and maintain employment. That’s crazy! Basically, you’re supporting an administration that wants to ignore 65 million people!

I’m always stunned when businesses aren’t in compliance with the ADA. Why shoot yourself in the foot? We have money. You want money. I don’t see the problem.

My non disabled friends should join me in my fight to keep the ADA intact. Last year, Trump said nothing at the ADA anniversary. Do you know why? As long as he doesn’t say anything about it, it will fade in the minds of his supporters. Quietly, the ADA rights and protections are being altered, ignored, or removed.

Join me in celebrating and protecting the ADA. It’s all the way with the ADA!

How has the ADA helped you? Let me know in the comments section or email me nathasha@audacitymagazine.com

Subscribe to the newsletter that others talk about for days! http://www.audacitymagazine.com/subscribe

Here’s another article that I wrote awhile back which got people thinking. What’s your thought on it?

Nathasha Alvarez is the founder, editor and your friendly Latina Diva on Wheels. Her goal is to support disabled people who want to live audaciously, one moment at a time. www.nathashaalvarez.com