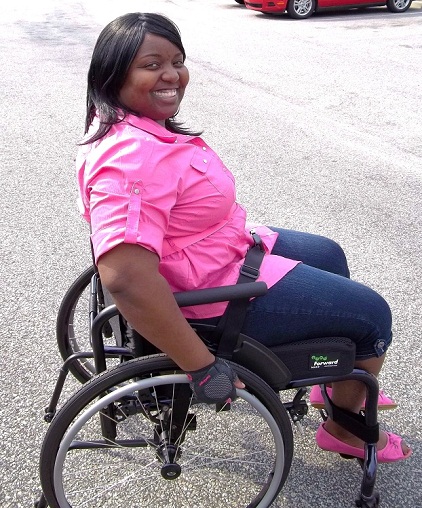 My name is Nina Ellis, and I’m 35 years old.  I live in Ladson, SC, about 30 minutes away from downtown Charleston.  My specific disability is unknown, since I have a few rare problems from injuries from a car accident in 2006.  I have severe

spasms when trying to bear weight, and my whole body shakes when I have these episodes.

Charleston, SC is a beautiful city with a lot of history behind it.  Its nickname is “The Holy City” because of the many churches there and their tall steeples are part of their amazing skyline.  Aside from its beauty, accessibility there is a bit to be desired.  Most of the downtown area have cobblestones that are nightmares for wheelchair users like myself. It’s been many times I was close to losing control of my chair because of the rough terrain.  The ramps on their sidewalks could use some improvement, too.  I have this same issue when I’m using my power chair, too.

My main pet peeve is people focusing on my chair and not on me.  My wheelchair helps me to get around, I’m not glued to it.  I’m a person with unique abilities.

The best part of my childhood was speaking for the first time.  I was 6 when I spoke a few words for my speech when I was graduating from kindergarten.  There wasn’t a dry eye throughout the crowd.  Before I was able to utter a word, I would draw to communicate with others.  I could write, but I was more comfortable drawing and most people were able to understand the drawings better.
The worse part of my childhood was my parents divorcing. I thought I was the cause of their breakup since I couldn’t speak up for myself.  I had a learning disability at that time, and it wasn’t until a car accident in 2006 that I became physically disabled.
I have two sisters, and both became more protective after my accident.  My relationship with both remained the same.

My greatest strength is my art.  I use it to express myself as well as my emotions.  It’s a gift from God that I don’t want to put to waste and joined an artist’s guild to gain more exposure and letting people know just because I’m disabled doesn’t mean I’m weak and I have a story to tell through my works.
Like the majority of people, math is my weakness.  I’m planning on going to school for visual arts to further my artistic abilities, and then I have to take a placement test that involves some difficult math problems.  I have an old math textbook, and sometimes I’ll read it like any other to try to solve a problem on my own.  I also have a cousin who’s academically gifted in just about any subject, and sometimes, she’ll help me whenever she has a chance to, since she works most of the time.
When obstacles are in my way, I just visualize in getting past that last hurdle in my way to reach that goal.

Aside from hanging out with my friends, I also participate in adaptive sports.  I’ve done archery, tennis and water skiing.  One of my close friends, who is also disabled, insisted I try to do the water skiing.  Despite knowing how to swim, I’m deathly afraid of deep water, and I had several people around me that helped me face that fear, and not to mention I had to go into deep water in order to get into the seat of the water ski.  In addition to doing that for the first time, it was also my 35th birthday last month when I did this.
I’m part of a group called Trident Breeze.  It’s a group for people with disabilities, and there’s monthly meetings and outings. Most of the members have spinal cord injuries, MS and a number of other challenges.  I don’t have a spinal cord injury, but I have weakness below the waist and a clubbed left foot.  I also have spinal problems related to the accident.
I’m a Super Mario fanatic – the Mario Kart franchise, to be exact.  I have huge collection of anything related to Mario Kart, but I also love the Mario series as a whole.  I don’t know many Mario shirts I have. Too many to count, I’ll say.  Lastly, I love the Japanese culture, along with the weirdness, and two of favorite Japanese delights are sushi and soft treats called mochi.  They’re usually filled with red beans or peanut butter, and sold in Asian grocery stores.

Before I was injured, I was also a welder, and that was my first job after graduating from high school.  It was less than a week after graduation that I started working.  It’s a tough trade, but I never let it weigh me down one bit.  It would be anywhere from 8 to 12 hours to complete a task, mainly for the Thanksgiving and Christmas holidays.  I’ll just say crunch time, to be simple.
I was a CNA – (certified nursing assistant) because I always wanted to be a nurse, and I thought that starting from the bottom up I would gain a lot of experience by doing it that way.  And not to mention my love for helping others.
Before I could have that chance, five minutes after leaving work, a woman drove through a blind spot and hit me.  My dream of being a registered nurse was crushed forever due to her stupidity.
Yes! That’s my story.
Want to know more? Ask me in the comment section. You can also find me on Audacity Magazine’s Facebook Fan page