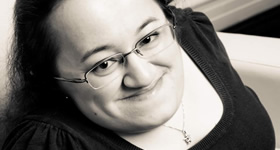 I never kept track of the number of broken bones I had growing up as a small, fragile child with OI, (Osteogenesis Imperfecta). Perhaps thirty fractures in all, but that would only be a guess. I do know I spent a good deal of time recovering from those fractures and the surgeries designed to make my bones stronger. My parents, seeking a way to keep me both safe and busy, turned my attention to the visual arts at a very young age.

I’d wake up in the morning to learn that my mother had set out a craft for the day that involved Indian ink or making goldfish mobiles out of ribbons. While my father would never describe himself as artistic, he would still sit and draw with me as we learned together out of those classic Ed Emberley drawing books for children.

No one ever told me “you can’t safely play outside with the other kids, but here are these crayons.” This was simply my childhood and, even amid the pain of broken bones, I was happy and that artistic jumpstart has definitely served me well.

Sure, I knew I was different, but wasn’t everyone?

My mother was different from my father since she’s from Thailand and he’s from Canada. My daycare friends were taller than me and could run around, but then again I could draw better than most of them. We were still at an age when all our differences were fun and exciting to each other—and I still thought I could be a firefighter when I grew up.

When I was six years old, I got my first electric wheelchair. Prior to that I’d been pushed around in a stroller or teetered around the house slowly with a walker. The chair was intended for speed and safety, however it was still a wheelchair and I think that was when I first began to understand the entire notion of disability—that I wasn’t just different, but different in a way that was perceived as negative to my peers.

When I was twelve, someone tried to upset me by writing some variant of “cripple” inside my school pencil box. I laughed about it and showed it off to my classmates since the vandal spelled it wrong. I never got any more messages in my pencil box after that.

Even so, I found it impossible to resent my new status among my peers as “cripple”, “disabled” or “wheelchair user” because the chair itself offered me so much freedom. I could suddenly do more for myself than I ever could before. The wheelchair became like my trusted steed and loyal companion. Thus, when I started to get out into the world more and began encountering accessibility issues, I didn’t feel disabled so much as frustrated that both my beloved wheelchair and I were being denied access. Also, when the other kids stared or tried to use my disability against me, I had little trouble shrugging it off and chalking up their attitude to simply not understanding my point of view.

I remember once when I was about ten years old I’d taken a bad fall at school and broken my leg in front of my horrified classmates. After I’d returned to school, some of the girls drew me aside with the air of people trying to impart important playground social graces. They told me I had called out for my “Mommy” when I’d fallen. I blinked when they told me this. I had no recollection of what I’d said, but I’d also been in a spectacular amount of pain at the time. They told me I really shouldn’t say things like that. It just wasn’t done and the other kids were thinking bad things about me because of it. Athena Cooper in the Winter Olympics

I don’t remember if I actually laughed in their faces, but I certainly wanted to. Exactly how many bones had they broken? If anything their advice had the opposite effect than the one intended as I came away thinking that playground social graces were pretty stupid. This attitude ensured I never broke into the ranks of the popular kids, but I was content in who I was and the friendships I formed were among kindred spirits.

Unfortunately the weight of the perception of disability only gets stronger as I got older. It never really occurred to me in either high school or university that I wouldn’t be able to work upon graduation. Both my parents are self-employed so I’d been doing contract work as a graphic artist—mostly for friends of the family—since I was a teenager. I saw absolutely no reason why I shouldn’t have a job just like everyone else. If the folks who handed out the disability welfare cheques saw otherwise, well they were mistaken in their views just like those kids on the playground.

I remember a conversation I had in a doctor’s waiting room with an elderly woman. I imagine I’d been talking about the freelance work I’d been scraping together or whatever part-time contract I happened to be clinging to while juggling my government benefits cheque.

“But you don’t have to work?” she asked.

I’m sure I looked pretty baffled in response.

Technically it was true. As someone with a “serious permanent disability”, the Government of Canada was happy to give me their tiny disability benefits living allowance until the end of time. The only problem with that plan was that I didn’t see myself as disabled which meant staying on benefits would make me a fraud in my own eyes. It didn’t matter to me what others saw since I’d known for my whole life that their view of who I was and what I was capable of was inherently flawed. My point of view on the subject was the only one that really mattered and I was going to keep at it until I got what I wanted.

In the end, it took twelve years from the time I graduated high school in 1995 to get to the point where I felt I had a full-time job and a career solid enough that I would never be in danger of slipping back on benefits again. I took five years to do my BA in Communications (aka media studies) and another two years to complete a diploma in computer animation. To help pay for my education, I built websites—lots of them—for fun and for clients. The first Audacity Magazine website was one such site I worked on during that time. I’ve never had any formal training in web design or development. I’ve built my entire career thus far on what I learned from books and articles off the internet.

I worked my ass off and in 2007 I was rewarded with a full-time position as the Web Administrator and Designer for the not-for-profit arm of the Vancouver 2010 Winter Olympics. As someone who was so excited about having the Olympics hosted in her hometown, this was a dream job for me and the launching pad for my career today.

It was never really about money or employment as those are simply the by-products of what I was really after.

Regardless of how the world chooses to perceive me, I still see myself as that gleeful six-year old with the brand new wheelchair. That tiny taste of independence at a young age was all it took to get me addicted to it. No matter what happens now, I plan to take my crayons and my trusted steed and motor off into the horizon.

What goals are you chasing? What are you willing to do to get there?

Athena Cooper considers herself to be a code monkey by day and an artist by night. She lives in Vancouver, Canada and is currently working as a Web Developer for the athletic apparel company, lululemon. Find more of her creative work as an acrylic and digital painter on her portfolio/blog, Tilted Windmills. You can also follow her on Twitter and Instagram.