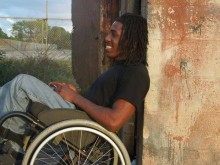 Even before he was born, Jeremie was already fighting the fight. Jeremie’s mother was involved in a car accident when she was six months pregnant with him. As a result, he was born with Cerebral Palsy and Spina Bifida. But he’s not home whining about life. He’s chosen to take his life and start what he calls a “Ten 4 Life” movement. According to Jeremie, “The movement is a way of life. From the street to the world. Make an impact. Leave your mark.”

And ever since he was a little kid, Jeremie has stood out while sitting down. When Jeremie wanted extremely expensive chrome wheels for his wheelchair, he wrapped them up in aluminum foil. How’s that for a pimped out ride?
There’s something about Jeremie that mesmerizes the people. He’s got that “Je ne sais quoi” about him. If there were a movie based on his life, he’d want Lorenz Tate to play him. I’m inclined to agree. When he told me about his high school afternoon “taxi rides” with the ladies, I knew he knew that he had “IT” too.

Guys, take notes! Turns out that, Jeremie didn’t like the high school bus picking him up so early in the morning and making so many stops in the afternoon, he remedied that situation by pushing his wheelchair two miles each way to school. In the afternoon, he’d give the pretty girls a ride on his lap at no charge, of course. Smooth operator!

Not everything was that simple to fix. Growing up, Jeremie had to take some hits when he was being physically and verbally bullied in school. But he found that his removable wheelchair armrests made great defense weapons. He’s taken a licking and kept on ticking. He’s not about sitting there without putting up a fight. That’s part of his “Ten 4 Life” philosophy that he wants all of us to adopt! Count me in!

Jeremie’s not one of those people with physical disabilities who hasn’t seen the dangers of life. Living a couple of blocks away from a high crime neighborhood, he could easily use his innocent looks to avoid the cops and sell drugs on the street. Because seriously, how many people in wheelchairs do you see getting busted for selling crack on the television show, “COPS”?
But not Jeremie! He saw his father go away for 17 years for that kind of life. Jeremie’s chosen not to be a chip off the old block.

Instead he turned to sports and music. Phenom, as he is known when he raps, produces and records music in his home studio where he lives with his brothers and grandfather spreads his “Ten 4 Life” message through his lyrics and beats. He wants to take his movement around the world so others know that it doesn’t matter if you have a disability or not, you are great and you can make a difference in the world.

Between practices as a point guard for the Miami Heat Wheels and spitting lyrics for his fans, Jeremie Phe Thomas, one hot looking dude on wheels, sees himself having an audacious journey and wants you to join him.
Check out his song “Bring that Heat” here and catch up with his team here.

Have a question for Jeremie? Ask away in the comment section.