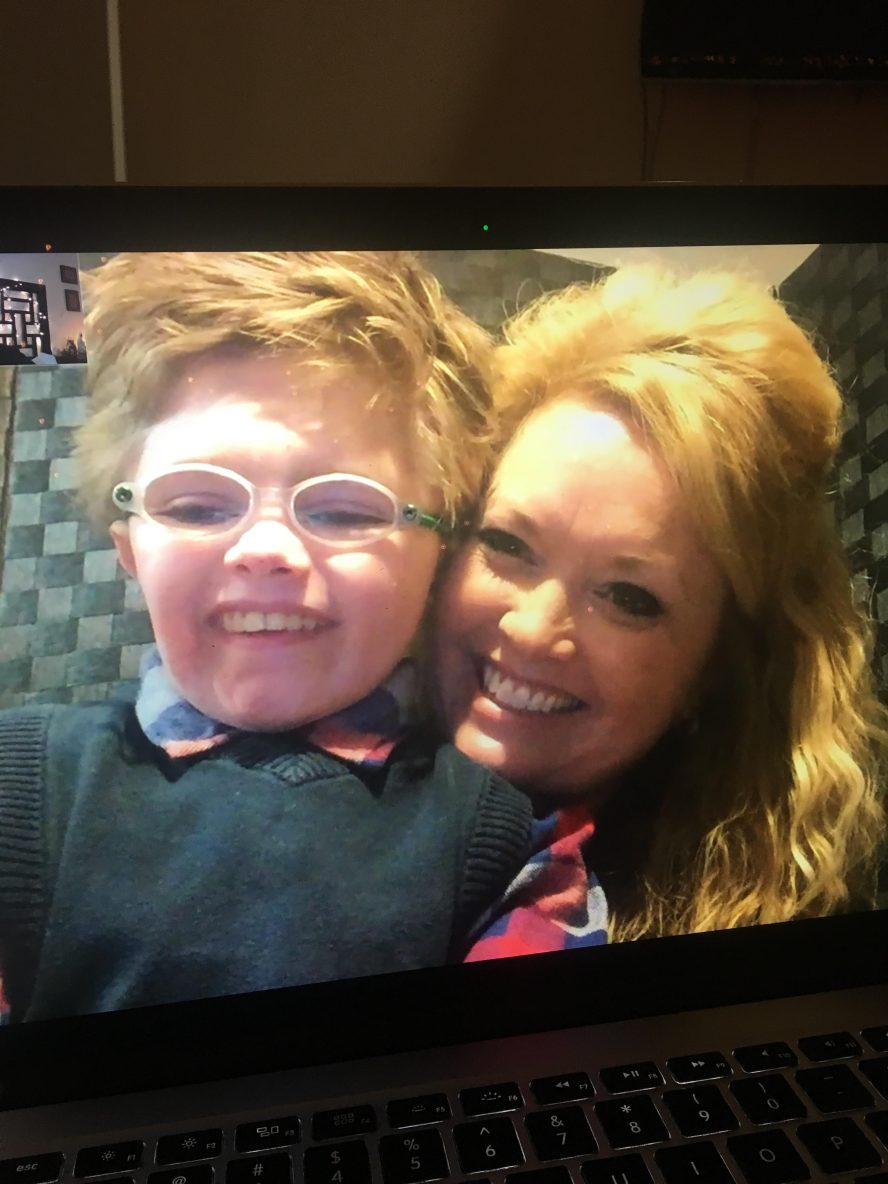 Cale Ferrin and his mom.

Cale Ferrin, actor with Fanconi Anemia, is adorable! That should be the summary of the interview. Cale is adorable! It’s definitely worth repeating.

Living in Nebraska with his family, Cale’s a fifth grader with more than enough charisma to bottle up and sell for years! This is no exaggeration! Within minutes, he’ll have you laughing, smiling and feeling better about yourself and the world.

Sorry about the poor quality of the photo. I shot it with my phone while having a video chat with Cale and his mom. Come on, they are adorable, right?

Cale Stars in The Nesting Doll

That’s a challenging task but it’s his most natural talent. Currently, his latest acting role in Nesting Doll is in post-production. Nesting Doll is a story about three women in a lakeside community whose lives intersect because of Cale’s character who has a physical disability.

Cale said he loved acting with the Nesting Doll cast because it was so much fun even though he had school work on the set. He’s also been a model in print ads, made guest acting appearances on tv shows and as a guest on talk shows to discuss his disability, Fanconi Anemia.

As many of us with physical disabilities know too well, hospital visits, surgeries and life can sometimes be emotionally and physically draining. With the support of his family and Cale’s positive spirit he has kept an upbeat attitude coupled with some lofty goals.

It’s been one of my favorite interviews because during our video chat I was able to enjoy his laughter, smile and the sparkle in his eyes which you, my audacious readers must take my word on was adorable.

So how does an interview go with a 5th grader who acts in movies and tv shows, models clothing and loves the Creighton University basketball team? It goes every which way with fun!

Cale says his 13 year old brother is his hero and his sister is his best friend. That’s so cute! But if he had to pick between Batman and Superman, he’d pick Batman. I chose Superman. That’s the only time we disagreed.  The good news is that his favorite subject in school is Reading (hooray!) which is great when he had to memorize so many lines in his latest movie.

“Show the world who I am!” he says is his focus right now. He’s not in denial about his medical situation. Cale Ferrin simply prefers to direct his energy and time in areas where he can make others smile, laugh, and be kind to each other. It really helps that he has a mother who is supportive and as positive about life as Cale. During the interview, the two exchanged hugs and looks of mutual respect.

Many people with disabilities want to be actors so I asked Cale for words of wisdom to impart on all of you future thespians. He said with a laugh, “Do it! Do not be afraid of the world!”

He’s so young to have such profound words of wisdom. Rather than focus on giving you, the readers, information about Fanconi Anemia that you can search on the internet yourself, I focused on the person living with Fanconi Anemia. Cale Ferrin is an audacious guy who is focusing on the “can do” attitude because in his opinion he wants the world to know him and what he can do.

And check out his movie Nesting Doll

Make sure you subscribe to the audacious newsletter! AudacityMagazine Newsletter