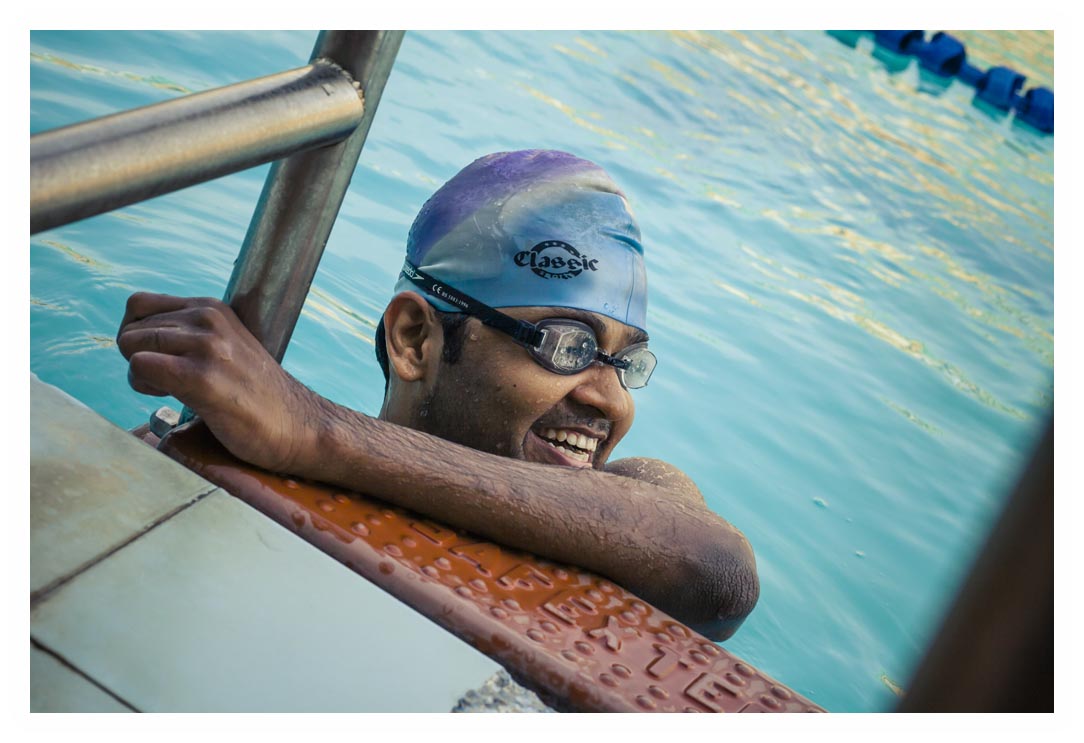 I’ve come a long way since a car accident that left me paralyzed neck downwards in December 2009. From being completely immobile after the accident to winning 4 gold medals in the recently concluded State Paralympic Swimming Championship in India

For any person who is severely disabled, their disability is the first competitor. As with any spinal cord injury, the urge to walk again remains without the realization that the prognosis is almost always poor.

That’s when I shifted from focusing on disability (legs/walking) to ability (upper arms) and started strengthening my upper arms. I no longer needed to be lifted and put in a wheelchair/car; my arms were now more than capable of doing it.

Instantly, my thoughts wandered around my passions – driving & basketball. I modified a car which could be hand driven and started driving. It has been 15,000 kms since and still counting.

With minimal hand and trunk functions, I almost ruled out playing basketball until one day I actually held the ball in my hands to realize I could still play wheelchair basketball. My disability was no longer my competition. These exercises and basketball were indirectly setting me up to be a good swimmer.

As I started playing basketball actively, I realized the need to increase my endurance and swimming was the first thing that came to mind. I still remember the first drive to the pool 6 months back. I’ve been a bit of a daredevil, always willing to try new things. At the back of my mind, I was wondering how I would be able to swim with just my shoulder and elbow movement and pull the dead weight of my body.

The lifeguards were very scared. It was a competition pool over 6 feet deep and my hand grip was not good enough to hold anything; they gave me a float to put around my body but with the float around, I could only float – not swim.

Five minutes later, I threw the floater outside the pool (I remember their flummoxed look) and I decided to float on my back by myself. I kept saying to myself “it’s all about holding my breath.” Although awkwardly at first, I was floating and as I began feeling confident, started my backstrokes. Every time I banged into someone I would swallow water…stopping mid-way was not an option…until I reached the ladder at the end, which I would gratefully hug with my elbows, there were no stops.

One week later, I was swimming 300m at a stretch. I started researching and analyzing every possible article and video on swimming. My mental construct was such that I had to look at the record times as I knew I was going to swim competitively. There was not one single coach who trained severely disabled swimmers in Chennai.

There were a few regular coaches who trained S8 and S10 athletes but were not inclined to train an S2 swimmer who was already 33 years old. Youtube videos became my coaches. I moved to the center lanes, where I would never be able to hold anything. That way, I would just focus on swimming without stopping. If playing basketball was hard for others to imagine, to understand how I swim is something most still grapple with.

Soon 300m became 600m, 800m became 1 km, and now I swim 1.5 km at a stretch. A British Paralympic coach once advised that the more aquatic I was, the better the swimmer I would be and he was right. I experimented techniques and just kept swimming more and more. I started intensifying my weight training and at the same time increased my protein intake.

Early in the month of June, State Level Paralympic competitions were announced. I started working on my speed. The faster I tried to go, the slower I got. Every time I tried rotating my arms faster, my legs started acting weird. While outside water, I have always been troubled by spasticity (a huge complication for neck and chest level paralytics), that was the first time I faced it inside water.

I went back to my laptop and with a bit more research, I continued my swimming experiments in the center lane. Change in breathing pattern helped reduce spasticity. It is just a journey well begun as I eye for the nationals.

Four and a half years ago, I did not have the choice to do away with my disability but I had a choice as to how to live with it. At every phase, there were challenges – physical, mental, social and architectural barriers. The swimming pool was inaccessible; the travel was 40 kms, waking up to a spastic frozen body, sympathetic stares and so on. I saw only the possibilities to overcome them. What can I say? While the world around finds excuses to disable themselves from doing something, I find reasons to enable myself. There’s a scientific calculator for measuring disability, there aren’t any for ability!

Justin Jesudas has a spinal cord injury and lives in India. You can connect with him in LinkedIn

What is your biggest competition in life? How are you mastering it? Let us know in the comment section.